The New Democracy Fund and The Andrei Sakharov Center for Democratic Development shared the honor of hosting the 11th Sakharov Conference – Copenhagen on the December 10, 2021.

The conference was an international event that marked the UN International Day of Human Rights and the centenary of Andrei Sakharov (1921-1989), human rights champion and Nobel Peace Prize laureate.

The conference had two focus areas – “The psychological consequences of state repression” and “Censorship and freedom of speech”. These two important issues was presented and discussed through speeches and panel discussions with selected key-note speakers, including Joachim Gauck, Former President of the Federal Republic of Germany, Jeppe Kofod, Minister of Foreign Affairs of Denmark, and a number of international representatives from expert NGOs and CSOs within the field of Human Rights.

The purpose of the conference was to strengthen awareness of the importance of human rights with a special focus on current challenges in Europe, Russia, and the Eastern Neighbourhood Countries (ENC) Ukraine, Armenia, Azerbaijan, Moldova, Georgia, and Belarus. Current trends and developments in these regions prove in multiple ways that a global dialogue and effort to promote and protect human rights are as important as ever.

The conference commemorated Andrei Sakharov and his unique contribution to the universal cause of human rights. To this day, he is remembered as a scientist, humanist, public figure, human rights champion, and Nobel Peace Prize laureate.

Sakharov openly criticized the Soviet totalitarian system, the threat it presented to international stability, and its systematic gross violations of human rights. Sakharov paid a high price for his stand. He also offered ways to solve the problems the world faces today. The Sakharov Doctrine of the indivisibility of international security, world peace, and human rights, is as relevant as ever.

The conference took place in The Danish Parliament on December 10, 2021, at 9:30 – 16:30 (CET) and was hosted by Danish parliamentarians Mogens Jensen of the Social Democratic Party, and by Bertel Haarder of the Liberal Party of Denmark, emphasizing that true democratic dialogue transcends party lines and divisions.

The conference was livestreamed on Vimeo and Facebook – free for everyone – and you can still watch it here.

Joachim Gauck is a German politician and civil rights activist. He became known as a pro-democracy civil rights activist in East Germany. Gauck was the first Federal Commissioner for the Stasi Records after the fall of the Berlin Wall and served as president of Germany from 2012-2017. Gauck has received numerous honours, including the 1997 Hannah Arendt Prize.

Alexey Kozliuk is a Belarusian human rights activist, researcher, and lawyer. He is co-founder of the human rights organisation “Human Constanta” in Belarus. Among other things the organisation helps citizens protect their rights. His research focuses on digital privacy, access to public sector information, data protection, and internet censorship.

Arzu Geybulla is an Azerbaijani columnist and writer with a special focus on digital authoritarianism and its implications on human rights and press freedom in Azerbaijan. In 2019, she launched Azerbaijan Internet Watch, a platform that documents, and monitors information controls in Azerbaijan.

Dr. Jana Javakhishvili, PhD, is a Georgian professor of psychology at Ilia State University, Tbilisi, Georgia, and a senior consultant at the Foundation Global Initiative on Psychiatry-Tbilisi. She is specialized in working with individuals, families, groups, and communities, who are traumatized because of political oppressions, military conflicts and displacement, natural disasters, and terrorist attacks.

Dr. Jens Modvig is a trained medical doctor and holds a doctorate in public health. He has used his medical background in the fight against torture for more than 25 years at Dignity – Danish Institute Against Torture. In 2013 and 2017, he was a member of the United Nations Committee Against Torture, and in April 2016 and 2018, he was elected chair of the committee.

Maia Mazurkiewicz is a Polish expert on fighting disinformation and behavioral changes. She is a co-founder and Head of Intelligence & Campaigns of Alliance4Europe, coordinator of the European Front, and co-creator of Keyboard Warriors in Poland.

Peter Juel-Jensen is a member of the Danish Parliament. He is Chairman of the Danish delegation in the OSCE (Organization for Security and Co-operation in Europe) and among other things participates as an observer in elections both in and outside Europe.

Robert van der Noordaa is a Dutch investigative journalist and expert on digital security and trolling, who has lived in Russia and Ukraine. He has developed ways to detect trolls and disinfo campaigns on social media, and in 2019 he founded the software company ‘Trollrensics’ with his partner Richard Odekerken. The company specializes in analysis of hybrid warfare, troll armies, and propaganda on social media platforms.

Robert van Voren is a Dutch human rights activist, sovietologist, and historian. He is the Executive Director of the Andrei Sakharov Research Center for Democratic Development at Vytatus Magnus University in Lithuania. Van Voren has published over a dozen books, where some have been about political abuse of psychiatry.

Tine Johansen is the president of the Danish Union of Journalists. Among some of her responsibilities are media policy, freedom of the press, ethics and working environment. In addition, she holds several board positions – one of them being at International Media Support (IMS).

Vyacheslav Bakhmin is an expert in philanthropy and civil society development in Russia. He was a member of the human rights movement in the USSR in the years 1968-1985, and in 1969-1970 and 1980-1984 he was a political prisoner. Today Bakhmin is the Chairman of the Public Commission for the Preservation of the Legacy of Andrei Sakharov, Co-chairman of the Moscow Helsinki Group.

Anna Libak is Foreign Editor at the Danish weekly, Weekendavisen. She is also well known in the Danish public as a commentator, writer, and an acclaimed foreign policy expert with in-depth knowledge on Russia and Eastern Europe. She is trained as a Language Officer in Russian in the Danish armed forces and holds a Masters degree in Social Studies and Russian.

About The New Democracy Fund

Behind the Fund is a consortium of five Danish CSOs: Danish Youth Council, International Media Support, Confederation of Danish Industries, 3F – United Federation of Workers in Denmark, and Danish Cultural Institute as lead partner. The Fund was established by the Ministry of Foreign Affairs of Denmark in 2020 as part of the Eastern Neighbourhood Programme.

Read about the Fund.

The Andrei Sakharov Research Center for Democratic Development at Vytautas Magnus University (VMU) in Kaunas, Lithuania seeks to make a significant contribution through its activities to the development of a pluralist and democratic society in Eastern Europe and the former Soviet Union, a society based on the rule of law, respect for human rights, and equal opportunity for everyone.

The Andrei Sakharov Research Center unites state-of-the-art academic research on developments in Central and Eastern Europe and the former USSR with existing multi-disciplinary expert knowledge at VMU; It stimulates multi-disciplinary and multi-national cooperation between VMU and its partners in other countries. It is the central coordinator of a new 2020-2025 project Reviving the Helsinki Spirit. The Center’s particular focus is on helping the younger generations attain knowledge of the past sufficient to understand the present and its likely impact on and implications for the future.

Read about the Center.

Read about the Reviving the Helsinki Spirit.

The conference is supported by Wistifonden. 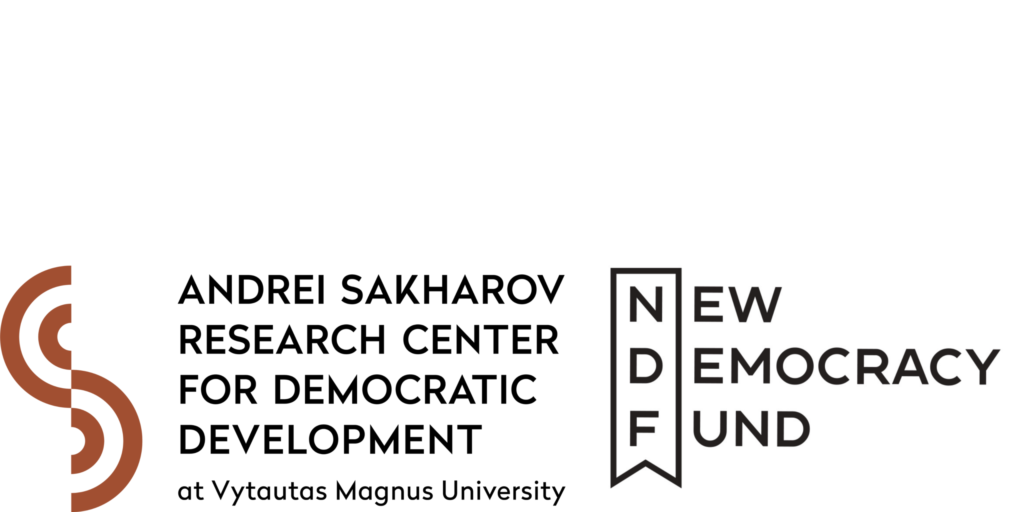