Our Vilnius Office hosts dialogue on fake news and disinformation 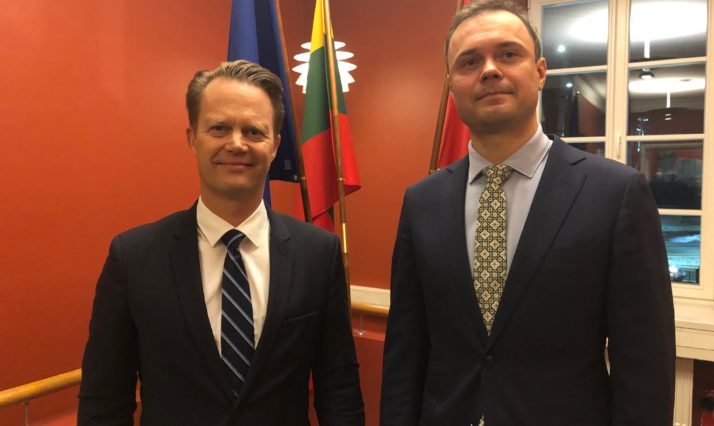 On February 2nd 2022, the New Democracy Fund’s regional office in Vilnius hosted a meeting about the media situation in the Eastern Neighborhood Countries with a special focus on countering fake news and disinformation. Present at the meeting were Danish Minister for Foreign Affairs Mr. Jeppe Kofod, Danish ambassador to Lithuania Hans Brask, and five media representatives from Ukraine, Belarus, Lithuania, and Denmark.

The New Democracy Fund works to strengthen a free and independent media in the Eastern Neighborhood Countries. The media plays a key role in the development of civil society in the region as a potential medium for positive political change and democratic dialogue. But media can also be used as a tool to spread disinformation and fake news amongst populations. New technologies and the tendency towards more news being communicated through social media platforms have made it easier for citizens, organisations and governments to produce and circulate ‘fake news’ and disinformation. Many social media platforms lack editorial assessments and fact-checking and instead encourage emotional engagement and quick consumption of information.

Fake news and disinformation have proven to be powerful tools to influence popular opinion or to mislead differences in political conflicts. Recent developments in the conflict between Ukraine and Russia have further exacerbated the use of fake news to influence public opinion.

Fake news and disinformation is a common challenge for media organisations in the Eastern Neighborhood Countries, Denmark, and the Baltic States. In this context, the Danish Embassy in Vilnius, the New Democracy Fund, International Media Support, and the Danish Cultural Institute in Estonia, Latvia, and Lithuania hosted a meeting on February 2nd on the current media situation in Ukraine, Belarus, and the rest of the Eastern Partnership Countries.

“Disinformation is a formidable challenge and we need to fight ferociously to sustain professional media and quality journalism – two of our best ressources in this challenge. Of equal importance is the need to strengthen our media literacy skills and our ability to critically assess our digitalised world. It is no small task, but we can build and strengthen alliances and connect national efforts to the global agenda so that lessons are shared and government, big tech, media and civil society are all brought board,” says Gulnara Akhundova, a long-time advocate against disinformation and IMS’ head of department for Global Response.”

The purpose of the meeting was to address the common challenges facing the Eastern Neighborhood Countries concerning fake news and disinformation and to discuss opportunities and news ways to strengthening collaboration across borders to counter these common challenges – this includes how Danish and Baltic civil society organisations can support the development of a free and independent media as a means to counter fake news and disinformation.

The participants agreed that a strengthened regional collaboration and a strengthened cooperation among civil society organisations are important tools to support the media. Furthermore, the participants agreed that there is a need for cooperation between the big tech companies, governments, and the civil society in order to have safer internet and supply of better journalism.

In December 2021, The New Democracy Fund opened a regional office in Vilnius to expand the local network of The New Democracy Fund, strengthen information exchange, and build synergies to other activities in the region. The office is located in Vilnius, which has become a hub city for co-ordination among civil society and the international community. The office, among other things, facilitates support to the Belarusian civil society organisations that have been exiled to Lithuania, and to strengthen the network and exchange of experiences between Baltic CSOs and CSOs in the European Neighborhood Countries.